The club’s new COO Stefano Perrone provided an update on the work. “Both of the stands behind the goal have been finished with the installation of new seats according to the FIGC regulations, with backs 30 centimetres high. The stadium’s capacity is now recognised by the FIGC and the Lega Calcio according to their infrastructure requirements.” 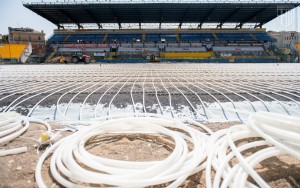 “The other major change regards the pitch that we’re completely redoing. At the moment, we’re installing undersoil heating which wasn’t obligatory for Parma as a newly-promoted side in 2018/19 but it would have been for the season after. We have combined this with relaying the turf which we needed to do. We’ve also completely redone the drainage system because the old one was 20 years old and not very effective and the irrigation system now has 24 sprinklers compared to 13 before as is the norm for modern pitches. On the night of 1 August, it will be possible to start relaying the turf.”

“We’re on schedule for the start of competitive fixtures with Parma in action at the Tardini in the Coppa Italia on 11 or 12 August and in the league on 18 or 19 August. For the Coppa Italia, we’ll be at reduced capacity and the East Stand will be closed apart from the disabled sector. On the other hand, we’ll be at full capacity for the start of the league season. The overall capacity hasn’t been affected by these works and the new seats haven’t reduced capacity which remains at 22,000. This works on the Tardini have cost around one million Euros overall.”

“There’s dialogue and vital collaboration between the Council who own the structure and Parma Infrastrutture, above all because of a series of administrative changes that have to be respected and carried out in the right timeframe. The lighting has moved from 1,000 to over 140,000 Lux. The lighting system consists of over 100 lights, it’s a first step to get closer to the standards of Serie A and UEFA which increase every year. For Goal Line Technology and Var, we’ve already completed the wiring required by those companies. Everything is ready for the Lega Serie A technicians to install the cameras for Goal Line Technology. There will also be a new big screen. It will be a video wall which doesn’t need to be contained within a wider structure, it will be self-standing and over 30 times bigger than the previous screen. Earlier, we performed important work in January for the coverage of the Tribuna Petitot to eliminate leaks.”

“This worksite over the summer has featured a large number of workers and partners. This starts with historic supplier, Luca Accorsi’s Ab Global Service alongside Milan company Rappo which is one of the leading companies in creating sport pitches. The installation of the seats was performed by another loyal sponsor in Canovi. For the pitch, we coordinated with Engie Program who manageservices for the Stadio Mezza in Milan with expert advice from Alessio Roso.” 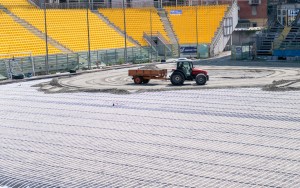 Vice-Mayor Marco Bosi was present as the work was presented. “Parma should be thanked for keeping up with its commitments as a club. We agreed that the changes required by the Lega Serie A following promotion were to be paid for by Parma Calcio. The club has fulfilled this. In these times in football, it’s not always the case to have the peace of mind in the knowledge that you’re working with a serious club. The Council has committed to invest in the rennovation of the external wall which will start soon. We must thank Parma because this boosts the public’s assets. It’s a pleasure that our club is in a league which it totally earned the right to be in on the pitch, beyond all reasonable doubt.”