Parma, 1 September 2018 – Tonight, the Stadio Tardini will see Parma host Juventus at 20:30 CEST. Ahead of the match, let’s take a look at the statistics and previous meetings. 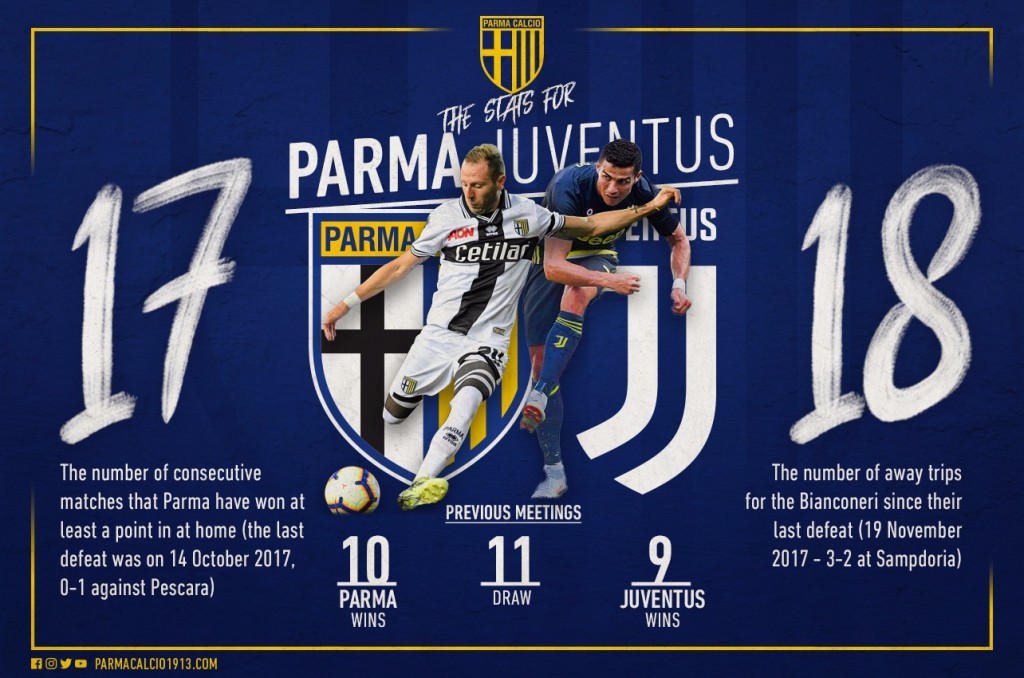 There have been 30 competitive encounters between the two sides in Emilia. Parma have won ten (most recently 1-0 in the 2014/15 Serie A season), there have been eleven draws (most recently 1-1 in the 2012/13 Serie A) and nine Juventus wins (most recently 0-1 in the 2014/15 Coppa Italia). Parma’s first-ever match in Serie A was against the ‘Old Lady’ on 9 September 1990. The Bianconeri won 1-2 with goals from Napoli and a Baggio penalty while Melli netted the Ducali’s first goal in the top flight. Against Juventus, Parma have won three titles: The 1991/92 Coppa Italia (2-0 in the second leg at the Tardini) before another cup win in the 2001/2 season (2-0 in the second leg at the Tardini). Furthermore, there was the 1994/5 UEFA Cup triumph (1-1 in the second leg in Milan).

PARMA, BE CAREFUL IN THE SECOND HALF

Parma have fallen away in the second half in the first two matches of the 2018/19 Serie A season. The Ducal went from 1-0 to 2-2 against Udinese at the Tardini and from 0-0 to 1-0 in Bologna against Spal, letting three points slip in the second halves of matches.

Parma haven’t lost a league match at home since 14 October 2017 when Pescara left the Tardini with a 0-1 win in Serie B. After that, the Crociati have won eleven and drawn six from the following 17 fixtures. Juventus haven’t lost on the road since 19 November 2017 when Sampdoria won 3-2 at Marassi. The Bianconeri have gone on a run of 15 wins and three draws since in their away fixtures.

Riccardo Gagliolo is on the verge of making his 200th appearance in professional football. He’s played 33 times in Serie A, 136 in Serie B and 30 times in Lega Pro after representing Sanremese, Carpi and Parma. He made his debut on 29 August 2010 in a goalless draw between Sanremese and Lecco in II Division, Lega Pro.