Collecchio, 9 October 2018 – The club is enjoying good results on the pitch at the moment even if the only objective in mind remains survival and Parma Calcio are also enjoying excellent results on the club’s digital channels.

With a constantly growing fanbase that has surpassed 400,000 followers in total, the Crcoati have enjoyed positive results in the past months thanks to the work that begun from the ashes of bankruptcy, when the club lost control of its Twitter and Instagram accounts and like the team, was forced to start again from nothing.

In the past 13 months, the Crociati’s Instagram account has grown by 700 per cent and moved into the Top Ten in Serie A for internaction according to data from Deportes&Finanzas. 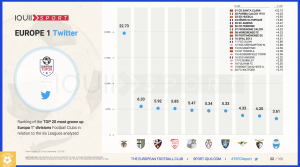 The Twitter account is also growing after being set up afresh when we started again in Serie D according to the data from Iquii Sport. Parma are the second-highest club in Europe in the standings for follower growth between 15 August and 15 September.

Significant investment has also been made on English-language content in order to reach Parma fans across the world. For some weeks on Facebook, users living abroad have seen the official page in English while a dedicated account has been set up on Twitter that has already taken on recognition from a big slice of Parma supporters.

How to stay entertained during the international break ????????

Tell us your favourite Parma player by nationality?