Parma, 27 June 2020 – The Crociati’s history against FC Internazionale di Milano, one of Italian football’s most noble clubs, at the Ennio Tardini stadium is sprinkled with many beautiful moments.

By winning 3-0, Parma became the first side to extinguish the so-called ‘Moratti effect’: the magical form that Inter were experiencing at the time. Since the day of Massimo Moratti’s inauguration as new owner and President, the Milanese team hadn’t yet lost, boasting six wins and one draw. On our pitch, Beppe Bergomi and his teammates were led by Ottavio Bianchi in the dugout and they came into the game on a run of five consecutive wins. The Nerazzurri team had to be reshuffled due to some absentees, although Nevio Scala had a similar situation with several players unavailable.

It was a hard-fought, balanced encounter but it ended with a clear, deserved winner thanks to two Crociati players in particular: Nestor Sensini, scorer of a brace, and Gianfranco Zola, whose ingenuity crafted two assists for his teammate as well as one magical free kick of his own. All the action on that Sunday 23 April 1995 came about in the second half, with the Argentine defender breaking the deadlock in the 54th minute: he found himself one-on-one with Inter’s ‘keeper, Gianluca Pagliuca, after the Sardinian playmaker had delightfully set him free and managed to slot home with a right-footed shot.

Sensini also had a hand in the second goal, which came courtesy of Zola’s venomous free kick in the 74th minute: his presence behind the wall made the low, fizzing strike even more difficult to save. He then sealed the win in the 81st minute with a pinpoint header after our no.10 swung in a perfect cross from a free kick. 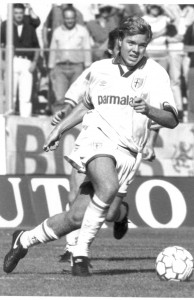 The Crociati fans also celebrated Tomas Brolin’s return to the pitch after a serious injury in a National team match had kept him sidelined since November: the Swede came on for Zola and the Tardini gave a standing ovation both for the man coming on and for the one departing.

With that victory, Parma moved to just eight points behind leaders Juventus with six matchdays to play. It was the latter who the Crociati would then beat in the UEFA Cup final to claim the trophy for the first time ever.

In the slide: Sensini celebrating. In the photos: Zola’s joy; Brolin in action; the Crociati fans at Parma vs. Inter on 23 April 1995.