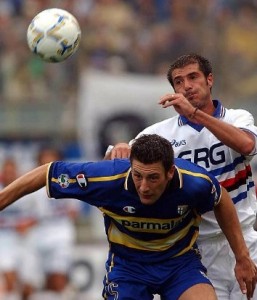 Parma,18 July 2020 – To retell the Crociati history of fixtures between Parma Calcio and Unione Sportiva Sampdoria at the Stadio Ennio Tardini, with the next chapter set to be written at 17:15 CEST tomorrow on matchday 34 in Serie A TIM 2019/20, we’ll need to go all the way back to the start of the millennium. 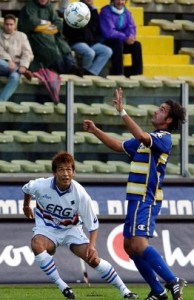 Having already looked back on our clash with Sampdoria after being knocked out of the UEFA Cup in the Nineties, this time we’ll be looking at a nervy 1-0 win from the 2003/04 season.

It was a success sealed with an Emperor’s stamp.

And of course that Emperor was Adriano, with a majestic header to secure the points on the day. 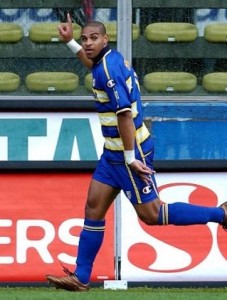 The goal came just 20 minutes after referee Stefano Cassarà had blown for kick-off.

Marco Marchino Marchionni, played in with an incisive pass from Daniele Bonera, charged into the area down the right and delivered his inch-perfect cross to our Brazilian waiting at the back stick.

Adriano was ready and waiting, having slipped out of the defence’s gaze, and met the ball brilliantly, with his powerful header making its way past goalkeeper Francesco Antonioli and into the net. 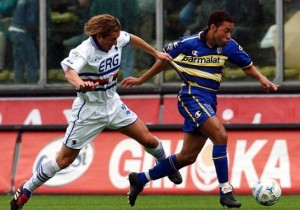 Sampdoria nearly pulled one back on three occasions in the second half, with Francesco Flachi a constant threat for the Crociati back line.

However, thanks to Sebastien Frey’s heroics on the day, nothing got through, not even a last-gasp chance in the 90th minute as our Frenchman came up with a miraculous save. 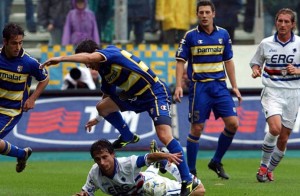 With the game into added time, it looked like Parma would seal the win with a second on the break.

However, Antonioli made himself big to keep out our subsitute Alberto Gilardino, who had come on for Domenico Morfeo, and the match finished 1-0. 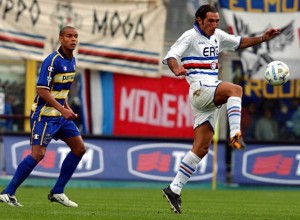 Header: Adriano thanking the Curva Nord at full-time. Other images: Bonera in an aerial duel with Massimo Marazzina; Simone Barone bringing down the ball in midfield; Adriano’s goal celebration; Junior and Aimo Diana competing down the flank; a scrappy phase of play; Matteo Ferrari getting ready to pounce on Fabio Bazzani. Below: the fan’s tifo in the Curva Nord in celebration of the relationship between the two sets of fans. 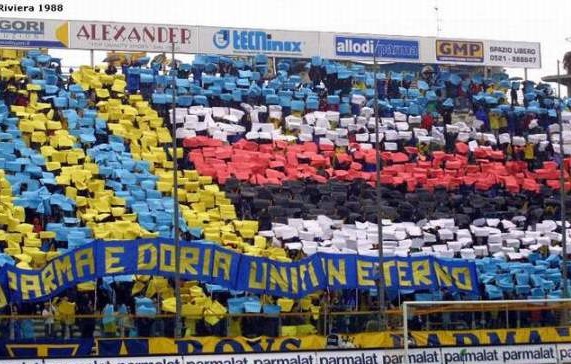