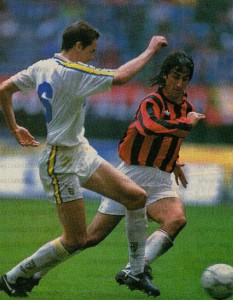 Parma, 14 July 2020 – There is one away trip to San Siro to take on AC Milan, other than the one that saw the Crociati qualify for Europe, that made history.

Looking back to the 90’s. Our story involves a team coached by Nevio Scala.

The date was Thursday 21 March 1993. The deciding factor was a wonderful free kick taken by Faustino Asprilla in the 58th minute. 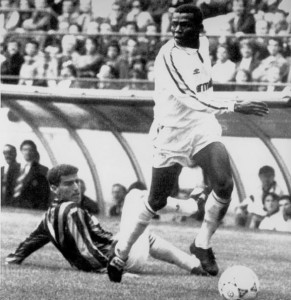 The result (1-0 to Parma) was the Crociati’s first-ever win away to AC Milan.

The consequence was the breaking of the Rossoneri’s, then coached by Fabio Capello, incredible unbeaten run, which lasted for 58 consecutive matches. A record that still stands.

This is the memory we want to take a look at ahead of matchday 33 in Serie A. 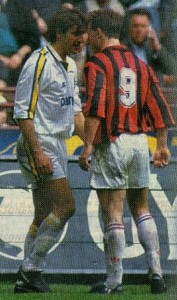 That spring Sunday 27 years ago, the champions from Milan were not able to get into their usual offensive rhythm. Our tactical set-up was to immediately close down any spaces which may have opened up for Il Diavolo.

Our counterattacks were well poised to hurt the home side.

From one of these breaks, we got a free kick. Referee Graziano Cesari blew his whistle for a foul on the left-hand side of the opposition penalty area. Tino stepped up, ran up and put the Crociati one up. Goalkeeper Sebastiano Rossi had no chance.

Asprilla celebrated with his usual exuberance, the famous somersault. 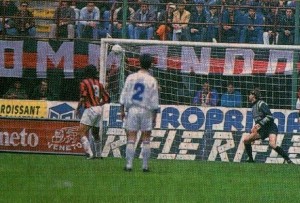 Parma, with their resistance, should have made it two, especially through Alessandro Melli. But they couldn’t quite get the second.

It was a party for all after the full-time whistle. 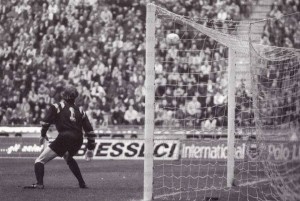 The crowd at San Siro praised both Milan degli Invincibili as they went on their lap of honour as Champions of Italy for the second successive season, and the Crociati, who in May, would go on to lift their first European title, the Cup Winners’ Cup. 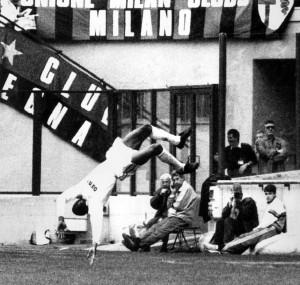 Faustino, the hero of the day, exchanged his jersey with Paolo Maldini before heading into the dressing room.

Header: Asprilla’s somersault after scoring the winning goal. Photos: Georges Grun takes on Arturo Di Napoli; Faustino escapes from Mauro Tassotti down the wing; a difference in opinions between Alberto Di Chiara and Jean-Pierre Papin; Tino’s perfect free kick from two different angles; another picture of his celebration. Below: the away fans. 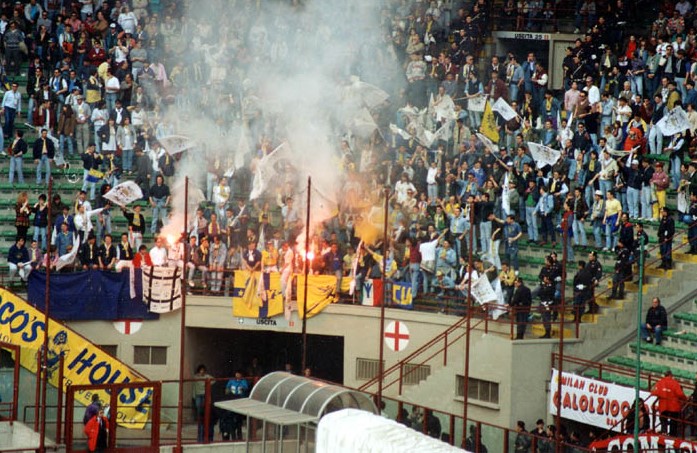