Parma, 27 July 2020 – With one day left until Parma vs. Atalanta, matchday 37 of the 2019/20 Serie A TIM season which kicks off tomorrow at 19:30 CEST, we look back at one incredible goal from the Crociati History of our clashes with the black and blue side at the Stadio Ennio Tardini.

The man who scored it is deeply intertwined in our history too, representing our colours over the course of two different centuries.

By role he was an extremely gifted midfielder, by heart he was full of passion and tactical intelligence.

He responded to the name of Gabriele Pin, and first donned a Parma shirt when he arrived at the Club in 1983.

That famous goal of his came on Sunday 21 January 1996, the day of his 34th birthday, which arrived in his second spell in Crociati colours.

Power, precision and a long-range effort from 30 yards out. Davide Pinato was left with no chance in net, and the move itself was born of Pin too.

Before hitting the decisive strike, Lele had carried the ball forwards from midfield. He played a quick succession of one-twos around the defence, with Gianfranco Zola on his right and Alessandro Melli on his left.

The defence couldn’t get near him. He controlled the ball, and fired off his shot. There were 37 minutes on the clock.

The shot was hit with technique, class and power, and it opened the scoring to make it 1-0.

A fearsome forward, Sandrino didn’t have to do much for that goal, as Zola bent one goalwards, the goalkeeper saved, and the ball dropped right at Melli’s feet for him to tap in to make it two.

Despite having established a clear lead in the first, Parma had to earn the win in the second, as Emiliano Mondonico’s Atalanta certainly didn’t give up the fight.

The away side’s front line, consisting of Domenico Mimmo Morfeo, Christian Vieri and Sandro Tovalier kept up their efforts until the end.

Their biggest chance to get back into the game came in the 51st minute, as referee Fiorenzo Treossi blew for a penalty after Nestor Sensini brought down Cobra Tovalieri in our box.

Bobo Vieri stepped up for the spot kick but fired it against the post, our man in goal Luca Bucci getting his fingertips to the ball after guessing the right way.

Luca was then to thank for keeping our net untouched right until the end, coming up with some excellent saves to make sure of a Parma clean sheet at full-time.

That league success over Atalanta took away some of the bitterness of the narrow 1-0 defeat just four days prior, with Parma falling short in the Italian Super Cup against Juventus at the Stadio delle Alpi in Turin.

Header: the team’s celebrations. Below: the fans in the Curva Nord at Parma vs. Atalanta on 21 January 1996. 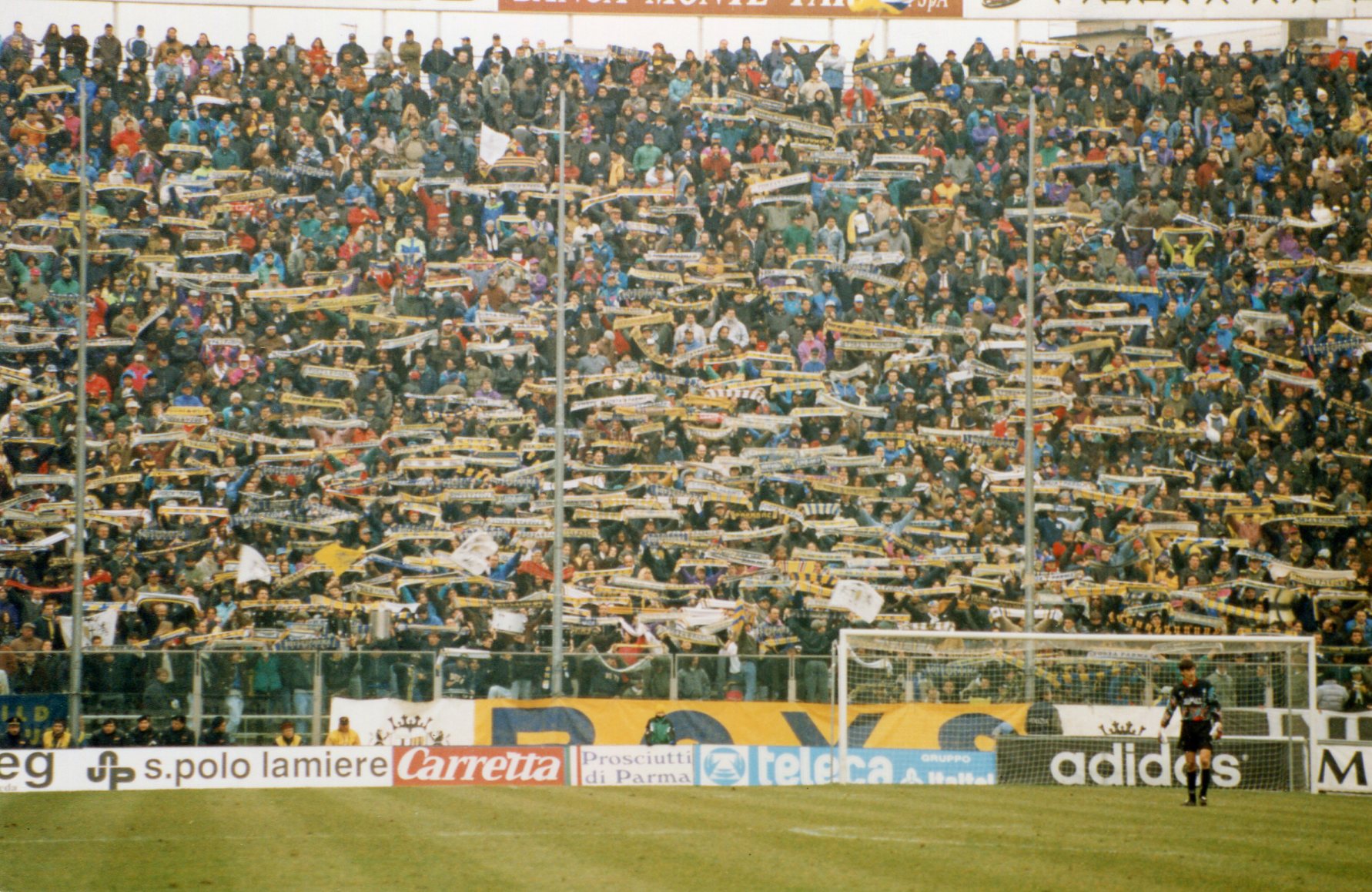