Collecchio, 23 August 2018 – Bruno Alves was one of Parma Calcio’s first signings this summer and today, the new Crociati Captain was presented to the press.

Here’s what he had to say: 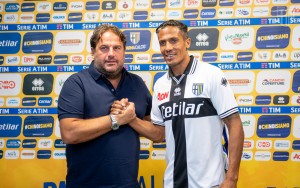 “I was one of the first to arrive, and despite what was going on, the most important thing for me was to play for this team and to bring my experience to the club, wherever they were playing. My mentality is to help the team and to influence the younger players to do better, as well as working to help reach our goals.

“Playing against Cristiano Ronaldo? We have another important match to think about before then, against Spal. Then we’ll have time to talk about the game against Juventus.

“Staying up? Obviously, I believe we can do it. So far, I’ve seen that we have a good team here, with experience and character. We will give everything to pick up points and to stay up – we can do it. My first impressions of the Tardini? The first game is always special, as was the case on Sunday playing in a stadium with lots of history. I think that the team played well. We deserved to win but to pick up a point is always positive. We still have work to do if we are to obtain better results in the future.”