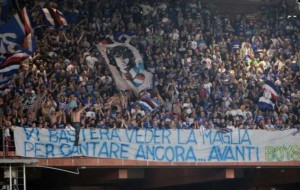 Parma, 27 July 2018 – The Crociati’s shirt in Serie A. Where did we leave off? It was in Genoa, on Sunday 31 May 2015. On the final day of the season. It was the final match in the top flight for a Parma FC side that had been bankrupt for months but continued to compete until the end. The players and fans all showed pride and an honest spirit until the very end. They were applauded by all, in every stadium and every city.

Where did we leave off? It was a match against Sampdoria who were pushing for a spot in the Europa League. It finished 2-2 with Raffaele Palladino and Silvestre Varela scoring for us after Alessio Romagnoli and Lorenzo De Silvestri gave the hosts the lead.

Above all, it was a celebration pre-match in the Ligurian capital as both sets of supporters marched together to the stadium before the match; singing, dancing and waving their flags through the Marassi area on their way to the Stadio Luigi Ferraris.

At the point and at that venue, it all ended for our team with the final whistle. It was met by the Sampdoria fans who all came together to sing “Tornerete in Serie A” [you’ll be back in Serie A]. It was a chant that truly resonated in the ears and then the hearts of all Crociati fans.

It remained a source of motivation and inspiration in these three years since the rebirth in the amateur leagues. Especially in the Curva where our fans have shown the Blucerchiati’s colours alongside our own colours and symbols.

Now, Parma are back in Serie A. Our first match against a top flight side will be tomorrow at 18:00 CEST at the neutral venue of the Stadio Briamasco in Trento in a much-anticipated friendly with Sampdoria.

It was something that both sides wanted, spontaneously blossoming from a chat between both clubs on social media. Two clubs and two fanbases united from afar. Two sets of supporters that have come together in how they interpret what it means to support their side. United in the use of colours, flags and both sharing a carefree nature.

Pictured: The procession of Sampdoria and Parma fans together in Genoa and the banner in the Gradinata Sud on the final day of the 2014/15 season.