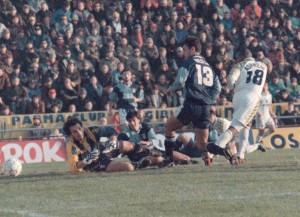 Parma, 20 October 2018 – Faustino Asprilla added three brilliant goals to his repertoire, lighting up meetings between Parma and Lazio at the Stadio Ennio Tardini in Serie A. The fixture will be held again on Sunday 21 October with kick-off at 15:00 CEST on matchday nine of Serie A TIM. The first meeting was a Serie B clash in 1961 which finished goalless.

On 23 January 1994, Tino was the star with a goal to make it 2-0 in the 89th minute, setting up an unusual bicycle kick for himself from close range in front of Luca Marchegiani.

A year later, on 24 February, a left-footed strike on the volley found the net after he set himself up by the flicking the ball with his knee. 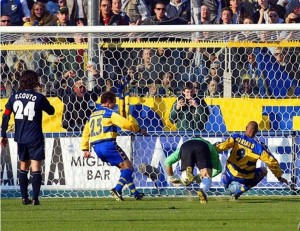 Ten months later, on 10 December 1995, he opened the scoring in a 2-1 win, applying the finish from in front of the Lazio goalkeeper Francesco Mancini with a cute right-foot flick.

In addition to these three unforgettable goals against Lazio, the 27 meetings between Parma and Lazio at the Tardini (most of which have been in Serie A with only four meetings in Serie B) have delivered eleven wins for the Crociati, while the points have been shared ten times. We’d like to look back to the meeting on 23 March 2003.

A packed Tardini exploded with delight as Parma snatched the victory in the 92nd minute as Adriano beat Lazio goalkeeper Angelo Peruzzi, who had just kept out efforts from the Brazilian striker and Mark Bresciano, to secure a 2-1 win. 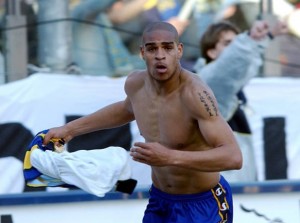 That day, the Crociati had taken the lead almost immediately through a goal by captain Beppe Cardone – his first for the club – before Lazio equalised after 50 minutes through Dejan Stankovic. After Stankovic’s goal, the match was a close one, with both teams looking to play open football.

But in added time, Adriano came up trumps to hand Parma the win. It was a deserved success, too, with Alberto Gilardino having hit the bar and Junior seeing his effort miraculously saved by Stankovic.

Photos: Top photo (above title): Cardone (along with Gilardino) displays his joy at scoring his first goal with Parma on 23 March 2003; from top left: Asprilla’s cute flick against Lazio on 10 December 1995; Adriano’s 92nd-minute goal in 2003; Adriano’s celebration; Adriano celebrating with his teammates. 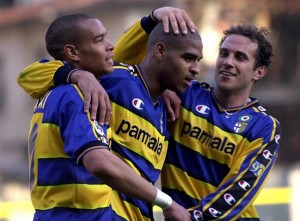