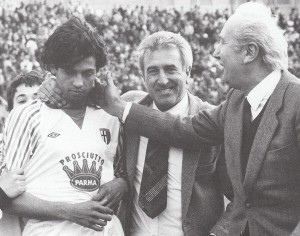 Parma, 21 December 2018 – This week’s Crociati History column looks at the Derby between the most two decorated teams in Emilia-Romagna, Parma Calcio and Bologna FC, with the pair set to clash tomorrow on matchday 17 in Serie A TIM.

Ahead of the match at the Tardini, we now take a look back at some recent drama.

The first game in question took place at the Stadio Ennio Tardini on a Sunday in 1983, ending as a dramatic 3-3 draw with our striker Massimo Barbuti climbing the Curva Nord fence after his heroics.

Serie C1 hosted the affair, a division where the Rossoblu had dropped down to after years of splendour. Meanwhile, we were just beginning our winning adventure, fulfilling the dreams of President Ernesto Ceresini.

The following year, this time in Serie B, Parma picked up their first-ever victory against Bologna. A win coming during a campaign where the ambitious Crociati were very nearly relegated despite boasting promising players such as Gabriele Pin, Nicola Berti, Silvano Benedetti, Roberto Mussi and Giacomo Murelli.

This notable triumph was achieved on 31 March 1985, played out in front of a packed home crowd.

The vital goal was scored in the 75th minute down at the Curva Sud – then filled with visiting supporters from down the road.

Marco Macina was the scorer, as he mazed his way past the bemused Rossoblu defenders and fired in a precise shot.

Macina was a two-footed, fast winger, gifted with skilled dribbling. He had authentic talent, although was never fully able to fulfil his potential.

Coincidentally, he started his career at Bologna before joining Parma in 1984.  A move to Milan soon followed, with then-coach Nils Liedholm saying: “I”ve never seen a player like it, faster with the ball than without.”

Macina made the Tardini burst with the joy, with the fans in the Curva Nord surging toward the pitch.

It was this result that helped turn Parma vs. Bologna into the Derby dell’Emilia that exists today.