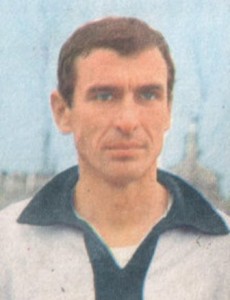 Parma, 9 October 2018 – Parma Calcio mourns the passing of Dimitri Pinti at the age of 85 and offers condolences to his family.

During three seasons, he represented the club 62 times in Serie B, the Coppa Italia and Serie D, scoring 16 goals.

He was a forward who moved to Parma towards the end of his career in 1963, having previously played for Lanerossi Vicenza in Serie A and Reggiana, Lazio and Udinese in Serie B.

The most successful one spent at Parma was the first. During his debut on 8 September 1963 at the Stadio Ennio Tardini, he scored a brace in the first round of the Coppa Italia during a 3-1 win over Cosenza.

The greatest memories for Crociati supporters came in the 1963/64 season when he scored key goals in away draws at Foggia (1-1), Alessandria (1-1) and Padova (2-2), along with others in 1-0 wins against Simmenthal Monza, Prato and Lecco.

The 1964-65 campaign ended in disappointment with relegation to Serie C. After a year out, he returned to aid the Parma cause in the 1966/67 season in the amateur leagues where Parma unfortunately went down twice in a row.

After that, Dimitri Pinti retired from his playing career at the age of 35.