Collecchio, 3 August 2018 – Alessandro Lucarelli is the new Club Manager for Parma Calcio. The former captain and holder of the record for the most appearances at the club with 350 was introduced in the new role with a press conference at Collecchio, alongside the Sporting Director Daniele Faggiano and Board Member Pietro Pizzarotti. 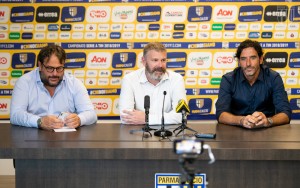 “Today is a very important day, after years of important battles, Lucarelli is now passing behind the lines to the other side of the trenches. The decision to bring him in as a director was a considered one, he’s a great reinforcement and will give a big hand,” said Pizzarotti at the start.

“There’s no need to say more, Alessandro has played and he’s always conducted himself as a real man. We thought of him for this role where he’ll be close to me and the Coach, he’ll be a point of reference for the players, the club and the whole environment. He always gave everything for this shirt, even turning down lucrative offers to go down to Serie D,” added Faggiano. “The friendships and respect that he has won in this stage of his career could be useful. He deserves it and it’s right that he plays a role in the club, he’s one of us and one of the family. He’s not just the front man, he’s the man who is Parma Calcio. His appointment is important, we think he can give a big hand.”

Alessandro Lucarelli then spoke himself as the new Club Manager. “I thank the ownership, the Director and the Coach for this appointment. It’s a great demonstration of faith, it wasn’t so obvious that I could continue in a different role. I’ll stay and work in the place that I love in a different role but with the same enthusiasm and will to give a hand as I did as a player. I’ll look to be a role model for all and I’ll be ready to help everybody, I know this place very well, I’m sure that I can give a lot. I’m a beginner as a director and I’m sure that Faggiano can help me, I’ll be involved in the technical side of the club, those two-way discussions between the Director and Coach will now take place with three people, I’ll be ready to offer my point of view and discuss everything related to Parma Calcio.” 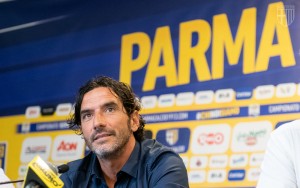 “Of course, it wasn’t easy to stop and I still don’t feel like a former player, the joy of what we achieved in May is still fresh in the memory. It was a summer full of thoughts and fears and there were some negative feelings too. It’s not easy when you’re at the sea and you don’t have to train by yourself to get fit for pre-season at a time when the others are getting ready for the season. But at the same time, I’m excited about the chance to start right away in this role and it’s restored my desire to be helpful. To do it while wearing the captain’s armband is a different thing all together but I’m sure that I can also be feel satisfied behind a desk.”

“The new captain? There need to be 4 or 5 five in the group who pull the squad forward, the Coach is observing the team and the leaders will naturally emerge. For me, Bruno Alves is the first to come to mind for his personality and international experience but that’s just my opinion. When the time is right, the Coach will decide. Is my role like Totti’s? To be honest, I don’t know exactly what Francesco does at Roma. My role isn’t just for show, I will be working and I’m at the club’s disposal. Even if I don’t have the power to make decisions, to come up with ideas can help all to make the best decisions for the club. I’m here at Parma because I can’t see myself anywhere else, but it wasn’t all down to me. I thank the club for this opportunity, my dream was to stay here, there’s nothing better than staying here to keep working for these colours. There will be rules to follow, I’ll always be available for the lads in every way. Parma has an image to uphold, behaviour off the pitch must be in line with that on it. Everyone must always be professional.”