Collecchio, 24 September 2018 – His goal against Cagliari received worldwide attention, also representing the cherry on top of what was a wonderful team performance on Saturday, as the Crociati picked up their second win of the season. Gervinho has since released a lengthy interview with Gazzetta dello Sport, during which he discusses goals, Parma and his career overall.

Here’s a small extract from his interview in today’s paper: 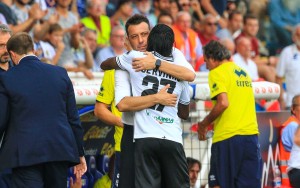 “What was I thinking during my goal against Cagliari? I didn’t think about anything. My play is made up of speed and fantasy – pure instinct. It was the best gift when I saw the fans happy after my goal. My aim is to please those who come to watch. The fans have welcomed me with open arms. I know that they’ve suffered a lot over the past few years, with the team playing matches in Serie D. I came because the sporting director Faggiano had courted me for a long time, and I wasn’t even a beautiful woman. He made me feel important and now it’s down to me to return the affection that I’ve received and continue to receive every day.

“Parma sought me out when I was looking for a good place to play. I don’t feel like it was a step down because before I was fighting for the title and now I’m looking to avoid relegation. For us, staying in Serie A will be like winning the Scudetto. We are a good squad, and we feel the whole city is supporting us. The Coach and I have struck up a good relationship. We talk a lot, and he asks me some things and gives me advice also. It’s nice because he treats everyone in the same way. He is a Coach that is sure to go far.”