Parma, 28 October 2019 – When Parma Calcio play Hellas Verona at home in the league, history suggests that Parma have an advantage: of the 29 matches played at the Tardini between these two sides, the Crociati have won 15 times, with the other fourteen results equally split with seven draws and seven losses.

And today were are going to look back at one of those draws as we delve into some Crociati History ahead of the repetition of this match on Tuesday at 19:00 CET on matchday ten of Serie A. 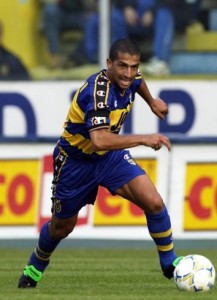 We’ve selected this match partially because it was played at the same point in the season as the upcoming game (Sunday 28 October 2001 on matchday nine of the highest division) but mostly because it’s a result that holds a place in Crociati hearts.

The Crociati had been eliminated in the first round of the Champions League by Lille that August and at that point they only had seven points in the league including just one win: a few days later this would lead to Coach Renzo Ulivieri leaving the club. His replacement, Daniel Passarella, would prove to be a flop but his successor, Pietro Gedeone Carmignani would go on to lead Parma to their third Coppa Italia as they defeated Juventus in the final. But on that Sunday those successes looked a faint possibility as the Crociati were two goals down at half-time against a Hellas Verona team led by former Parma coach Alberto Malesani. 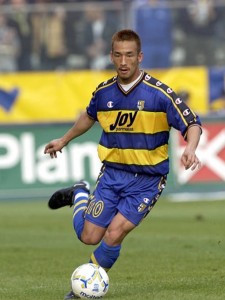 The Veronese side had scored two almost identical goals, as two crosses were headed home.

It was a surprise to see Parma concede such simple goals considering the wealth of talent at the back: Sebastien Frey was in goal and in front of him was the formidable trio of Fabio Cannavaro, Nestor Sensini and Matteo Ferrari.

The visitors took the lead in the 20th minute as the Liechtenstein forward Mario Frick converted a cross from Croatian left-back Anthony Seric, and they doubled their advantage in the 44th minute as Massimo Oddo’s perfect cross from the right found Adrian Mutu; a year later the Romanian striker would be playing for Parma.

Ulivieri changed his tactics during the break and made two substitutions: Marco Marchionni replaced Aimo Diana and the Ghanaian Stephen Appiah took the place of the Colombian Jorge Bolano. 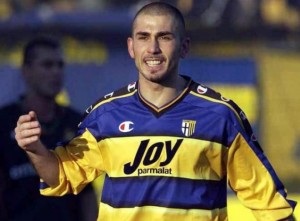 It was a moment of individual brilliance from the focal point of our attack, Marco Di Vaio, as he beat the Hellas’ keeper Fabrizio Ferron with a moment of quick thinking, desire and technique inside the area.

From that moment onwards Parma dominated the match, they pushed forwards cheered on by the Curva Nord. They were creating chances but were failing to convert them.

The Neapolitan forward, who was only 20 at the time and had only played seven minutes previously that season, started a deadly counterattack in the 88th minute. 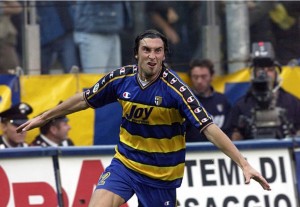 He played a long ball to Di Vaio, who received the ball in front of his marker Nicola Gonnella and fired a shot against the crossbar.

His strike partner, Emiliano Bonazzoli, picked up the rebound and ran at the defence with confidence and power and fired a left-footed shot into the back of the net. 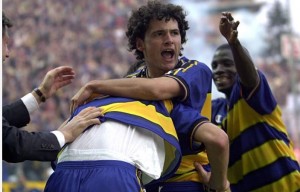 The Tardini exploded with joy from the team and the fans. It was a 2-2 draw that felt like a win due to the will-power and the desire shown by the team.

In the banner: Bonazzoli celebrates beneath the Curva Nord after the equaliser. In the images: a exchange of views between Cannavaro and referee Massimiliano Saccani di Mantova; Sabri Laomuchi and Nakata in action; Di Vaio’s and Bonazzoli’s joy after scoring their goals; Bonazzoli’s embrace with the whole team, particularly with teammates Grieco and Appiah.