Parma, 30 November 2018 – The trip to the Scala del Calcio to face the Rossoneri will be back at lunchtime on Sunday. It’s the venue for some of the greatest moments in Crociati history, the stadium where we won a European Supercup on 2 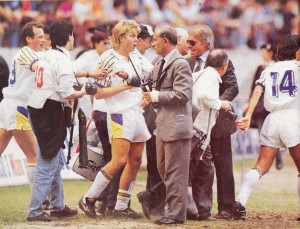 In the league, there have been some classic meetings as we prepare to meet once again. In recent memory, there was the 2-4 win on 16 March 2014 when we won thanks to an Antonio Cassano brace along with Amauri and Jonathan Biabiany goals.

However, it is a 0-0 draw that was anything but dull that we want to look back on.

There no goals but lots of drama. 5,000 travelling Parma fans were in the Stadio Giuseppe Meazza that featured 83,520 in attendance as our club reached a historic landmark. 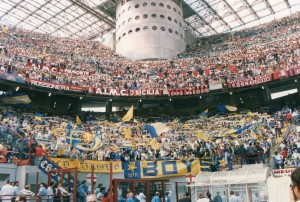 That Sunday afternoon on 26 May 1991, at the end of the season that was our first in Serie A, Parma Calcio secured a place in European football for the first time, qualifying for the UEFA Cup. On the final day, four teams were on 37 points, competing for fifth and sixth in the table that would be enough to play in Europe next season. Along with Parma, Juventus, Genoa and Torino were all competing to make it. While the Crociati were drawing in Milan, the Bianconeri lost 2-0 at Genoa in the direct match-up while Torino drew 0-0 at home with Atalanta. That meant it was the Old Lady who missed out, falling to seventh.

Contrary to what some might have thought, the draw between Nevio Scala’s side and the Rossoneri was not something that both sides played for.

Both created different chances to score but were unable to take them as the home side controlled possession while the visitors looked to hit them on the break.

In the ninth minute, Milan went close to taking the lead. The midfielder Alberigo Bubu Evani played in an inviting cross from a free kick for the oncoming Filippo Galli whose shot hit the outside of the post.

In the 39th minute, our goalkeeper Claudio Taffarel was forced to dive down at the feet of Marco van Basten as he was bearing down on goal. 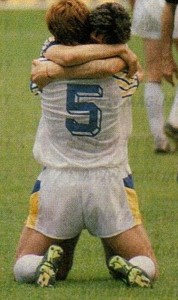 Three minutes later, the Milan goalkeeper Sebastiano Rossi was able to save without any issues from Marco Osio who was set up by Enzo Gambaro. It was a real chance and perhaps things could have gone better had Gambaro been more selfish seeing as he was in a better position.

In the second half, there were two clear chances for both sides. In the 57th minute, the other Milan centre-back Alessandro Billy Costacurta burst forward into midfield, he played it out wide to the right-back Mauro Tassotti who played a perfect ball for van Basten who somehow missed from point-blank range, firing straight into the arms of Taffarel.

In the 84th minute, Tarcisio Catanese, Osio and Aldo Monza linkws up but our full-back left the shot for Tomas Brolin but the Swede was a bit off-balance as he struck over.

At the end, both sides could celebrate at the Scala del Calcio. We made it into Europe while Milan and their fans bid farewell to Arrigo Sacchi with applause.

The Coach who had joined from Parma four years prior left having won the Scudetto, the Supercoppa Italiana, two European Cups, two European Supercups and two Intercontinental Cups. Fabio Capello would come in to replace him.